As the last thing on my to-do list I’ve build an enclosure (or box if you will) for my Arduino and GAUPS shield for my ShapeOko so that it will get out of harms way. Please see this post for an explanation.

I decided to make the enclosure from 10 mm plywood and add two improvements to the electronics: a 24V 60 mm fan to keep the GAUPS shield cool and a kill switch to be able cut the power for the stepper motors. 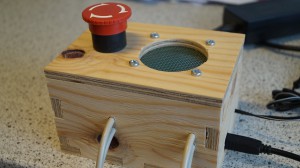 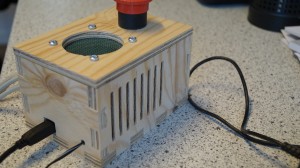 If you missed part 2, please find it here.

Now I’ve finished the frame, mounted the z-axis gantry and rewired all the stepper motors. It starts to look like a ShapeOko again. 🙂 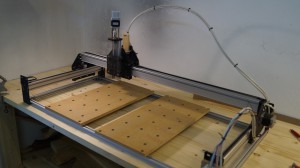 After connecting everything and switch some wires to make the stepper motors run in the correct direction, I was ready to give it a try:

In the video above I’m moving the machine 800 mm on the x-axis, 300 mm on the y-axis and 25 mm on the z-axis just to test that I actually have the working area I expected. 🙂 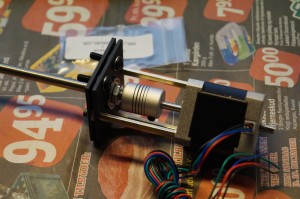 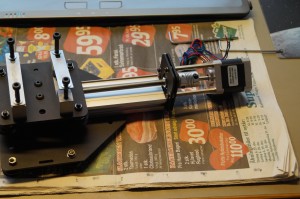 And finally the X-axis carriage was mounted. 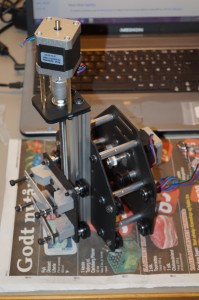 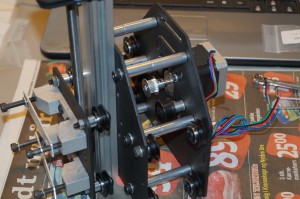 So far – so good. Now it’s time for the entire gantry.

The X-axis is comprised of the Z-axis sub gantry, two MakerSlide rails and the two last stepper motor carriages. 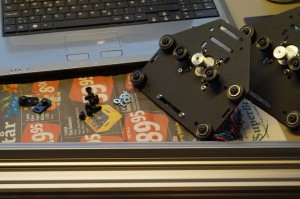 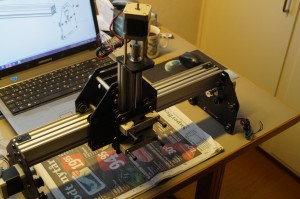 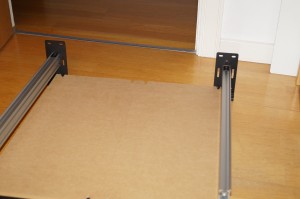 The Y-axis rails and the frame completed 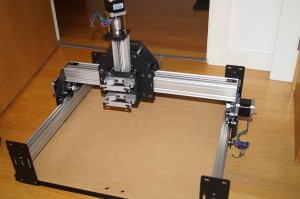 So I’ve finished the assembly of the mechanical parts and “all” I need is to assemble the electronics, finish the wiring and mount the belts before I can make a test run. I have to say that the instructions are very clear and easy to follow – if I can do it, anybody can! 🙂

First of all I read all the way through the assembly on this page. It’s quite clear and informative so I guess that assembly will go smoothly. I started by counting everything in the box just to see that everything on the bill of materials was sent from Inventables – it was! 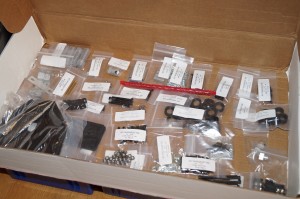 A box of parts

Software and testing the electronics

I installed the Universal G-code Sender as described. Then I unpacked the Arduino, the g-Shield, power supply and stepper motors and assembled the electronics on my desk to give it a test run as suggested. The instruction are clear and everything worked out of the box. 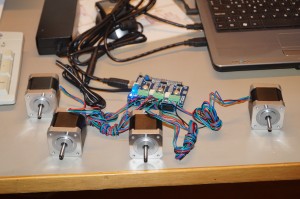 Then it was time to start working on the mechanics by assembling the V-wheels and the smooth idlers – a lot of ball bearings and washers – but just work to be done. 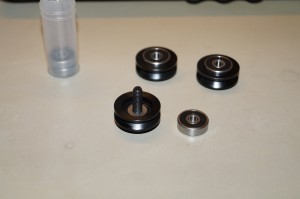 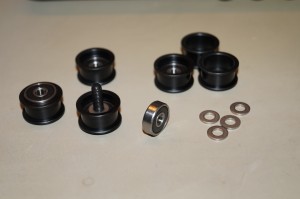 Then it was time for the motor mount carriages – three in total: two for the Y-axis and one for the X-axis. 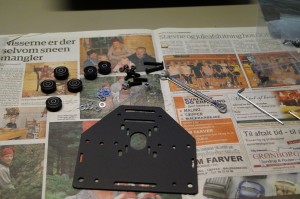 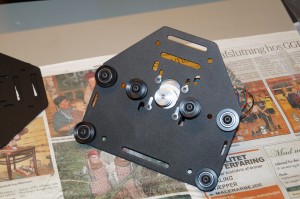 In the photo I’ve assembled the Z assembly carriage and the spindle carriage and all the remaining parts (except the X-axis motor mount carriage) are lined up for assembly.

This is as far as I got today. Now I need to be tapping the MakerSlide to make further progress – a process I’ve never done before so I’ll have to work slowly, carefully and patiently.

Let me introduce my latest project: An Arduino driven box joint jig for my table saw! I saw a video on YouTube where some guy showed a box joint jig driven by a stepper motor and I decided to make one myself.

I already build a hand driven box joint jig very much like this one made by Matthias Wandel (it works fine by the way), so I started to build the electronics using an Arduino One, a 16×2 LCD screen, a Pololu A4988 stepper motor driver shield, a rotary encoder (with a micro switch included), a 18.5 V power supply, a Nema 8 stepper motor (SY20STH30-0604A) and some smaller parts (resistors, an LED, a LM7805 regulator and a capacitor). The whole thing looks like this: 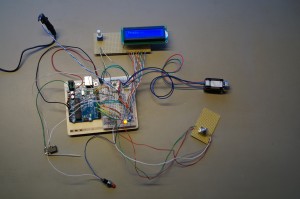 Electronics for my box jointer project

Here is the schematics for it (without the LM7805 regulator and the capacitor):

Schematics for my box jointer project

The rotary encoder is used for controlling the menu (the switch labeled S1 on the schematics is actually built in the rotary encoder). The switches S2 and S3 are used for resetting the jig and for moving the stepper motor forward.

Here’s the sketch (it may be subject to change or include bugs): BoxJoin

Any cookies that may not be particularly necessary for the website to function and is used specifically to collect user personal data via analytics, ads, other embedded contents are termed as non-necessary cookies. It is mandatory to procure user consent prior to running these cookies on your website.