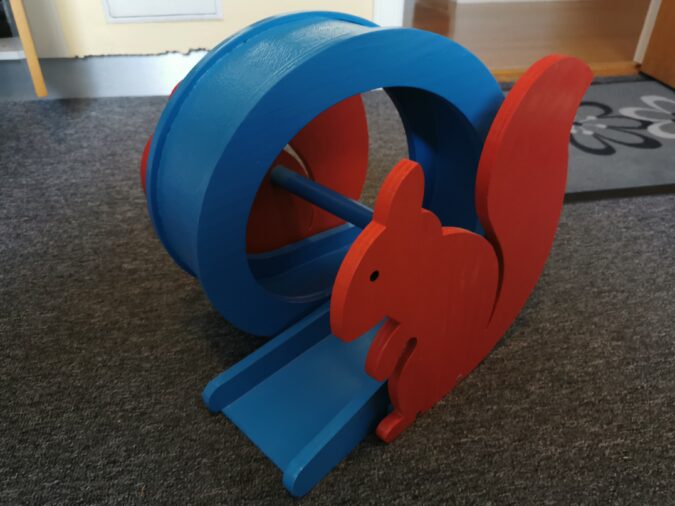 As you might have noticed, I’ve started to make toys for the local golf club. 🙂

The golf pro want’s to use the toys for the kids at the golf club to play with and I promised to make some toys for that purpose.

For some time I’ve been thinking about how to make a loop in wood. I tried various ideas out but ended up with this simple version.

I started by cutting two circles in plywood for the sides of the loop and then cut the circles open. Then I made a long strip of Masonite 10 centimeters wide and cut a groove in both circles to hold the strip of Masonite.

After applying glue to the grooves in both sides, putting it all together, and holding it with clamps, then I used brute force to turn the circle into a loop and clamped it to my workbench until the glue had dried.

After the loop had dried I mounted it on a piece of plywood and contructed two ramps from plywood and Masonite.

The two squirrels were cut on my ShapeOko 2 CNC machine. They aren’t really needed but I added them to make the toy look cute and fun to the kids.

This website uses cookies to improve your experience while you navigate through the website. Out of these cookies, the cookies that are categorized as necessary are stored on your browser as they are essential for the working of basic functionalities of the website. We also use third-party cookies that help us analyze and understand how you use this website. These cookies will be stored in your browser only with your consent. You also have the option to opt-out of these cookies. But opting out of some of these cookies may have an effect on your browsing experience.
Necessary Always Enabled
Necessary cookies are absolutely essential for the website to function properly. This category only includes cookies that ensures basic functionalities and security features of the website. These cookies do not store any personal information.
Non-necessary
Any cookies that may not be particularly necessary for the website to function and is used specifically to collect user personal data via analytics, ads, other embedded contents are termed as non-necessary cookies. It is mandatory to procure user consent prior to running these cookies on your website.
SAVE & ACCEPT