On March 20th we had a partial solar eclipse over Denmark where the sun was about 83% covered by the moon. Of course I would like to take some photos but I needed a solar filter for my camera. Why not build one using my ShapeOko? 🙂 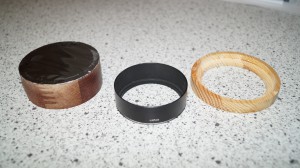 The ring that goes over the lens hood is made 1mm larger in diameter that the outside of the lens hood to give space for some cloth (to prevent scratches). In the photo I’ve already attached some solar film with double sided tape to the ring. Here is another view of the parts where the inner green cloth can be seen:

The outer ring is made to fit the inner ring with just 0.5mm of space. Here is the assembled solar filter: 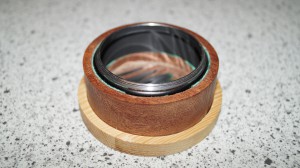 Building the Dominion turntable and adjusting my ShapeOko 2 has really learned me a lot and has given me the accuracy that I would expect from a CNC machine in the first place. I just love when things actually work but I have to admit that it’s been a steep learning curve and a lot of tinkering, before I’ve gotten to this point with my ShapeOko 2. 🙂

If you have a ShapeOko and is getting more and more frustrated with it, I encourage you not to give up just yet. Feel free to ask any question or even better: search and/or contribute to the ShapeOko forum where a lot of nice people will help you in any way they can. 🙂

Unfortunately the weather was rather cloudy at the time of the event in the part of Denmark where I live, so I didn’t get any good photos. 🙁 The only one I got was this one taken without the solar filter: 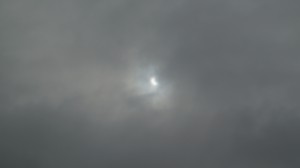 This post is just to warn you people out there who (like me) likes woodworking. If you surf the Internet looking for woodworking plans, please stay away from Ted’s Woodworking Plans – No, I’m not going to link to the page. No reason to give them more traffic.

Ted’s Woodworking is a scam!!!

This video made by Steve Ramsey from Woodworking for Mere Mortals explains the scam quite well:

Any cookies that may not be particularly necessary for the website to function and is used specifically to collect user personal data via analytics, ads, other embedded contents are termed as non-necessary cookies. It is mandatory to procure user consent prior to running these cookies on your website.